In an older review I posted this year for Takashi Miike's "Fudoh: The New Generation" I stated that if there is one unifying theme in Miike's work it is that violence begets violence. Nearly twenty years after Fudoh came out the man is still grappling with those same ideas in his most recent picture Yakuza Apocalypse. Miike has been making yakuza pictures his entire career, and they make up the greater amount of his early v-cinema contributions when he was a director for hire in his earliest days as a director. He's still a director for hire, but in a bigger Japanese blockbuster system. He's still making yakuza pictures in his own brand, and even with more restrictions on what he can and can't do with more money involved he's still raking the coals of puncturing violent cinema with both comedy and a mournful approach that tackles the subject head-on.

In a recent interview with the A.V. Club Miike stated that he does not like violence. When Miike begins to assess the truth of his characters they become violent. Miike is not a cynical filmmaker for these preoccupations with violence, but an empathetic one. In Miike's first golden period he made a handful of films that would be known as the Dead or Alive Series as well as another masterpiece in Deadly Outlaw: Rekka. These are violent pictures, but Miike handles the theory of violence in an interesting way. For Miike violence is a tangled web his characters get lost in. They're products of their environment rather than essentially violent people. Yakuza Apocalypse follows in those footsteps, even if it's a much lesser achievement than that series of movies Miike put out in the early 2000s.

Yazuka Apocalypse begins as an analysis of masculinity and how that is intertwined with the nature of the Yakuza. There are specific examples of the absurdity of masculinity as gatekeeping: Drinking blood in front of your overlord, punching each other squarely in the face until another man falls, having your foot stomped and offering the other foot for the same punishment. It's all to prove oneself to some masculine superior in the yakuza- in this case, vampire lord Genyo Kamiura. For our lead character Kageyama the yakuza offers him a role he can fit into, and a fantasy of what he could become. It might even be like the movies, but that all unravels when he finds out his superior is a vampire, and turns him into one as well, making him the new central figure of masculine power. In a later scene Kagayama uses his powers on an otherwise emasculated child who weeps and sobs at not being strong enough, but then after Kageyama turns him into a vampire the child finds himself with his newfound strength. All of these ideas on what it means to be a man are taken to their logical extreme in the black comedy Ichi the Killer, but they are brought back here to round out some of Miike's ideas on the absurdity of the Yakuza.

The vampire mythos is also important to Miike's ideas on masculinity. Yakuza pictures have been done to death, but yakuza vampire pictures are a new layer on the genre. On paper it sounds absurd, but that's Miike. He takes the absurd and levels it in his ideas and his cinema. Vampirism sweeps through Japan when Kageyama begins to turn other people. It sweeps across this setting like wildfire, until finally our vampire lord can walk with an army behind him. When you place this scene beside an earlier scene where an elder discusses the dangers of spreading vampirism too much you get a clearer picture of what Miike is getting at by utilizing genre instead of playing his Yakuza picture straight. The spreading of vampirism is the spreading of the yakuza is the spreading of violence is the end of life, and a great criticism of violence in and of itself.

As dour as Miike can be sometimes he always has a sense of humour, and this is where many people have the wrongheaded idea that the man is simply "crazy". Miike simply doesn't play by rules. This places him closer to cinematic kin of Joe Dante than it does other filmmakers he is often compared to like Sion Sono. At the close of Deadly Outlaw: Rekka a man with long white hair says "Rock n' Roll" and that general idea comes back here when they unravel the mystery of defeating the Japanese folklore Kappa god with a piece of paper that says "Stay Foolish". Miike lets loose in the final third finally delving completely into the Vampire and Japanese Folklore of this genre cinema picture. There are Frogs performing wire-fu, grenades going off, mockery of Sergio Leone and a subtle homage to John Carpenter's They Live. He ignores all pretenses of ending his picture in the classical way he set up the first two acts. Yakuza Apocalypse isn't as interesting when it abandons a majority of it's ideas for something a little more altogether crowd pleasing and what North American audiences expect from Takashi Miike, but it is fun, jovial and loose in a way that recalls that Rock N' Roll man at the close of Rekka. Miike has put out better work this year (As the God's Will), but Yakuza Apocalypse is a wonderful addition to the dense filmography of an often misunderstood master.

Yakuza Apocalypse was recently added to Video on Demand. 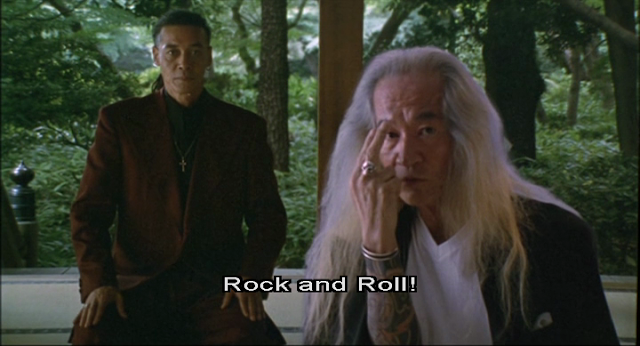