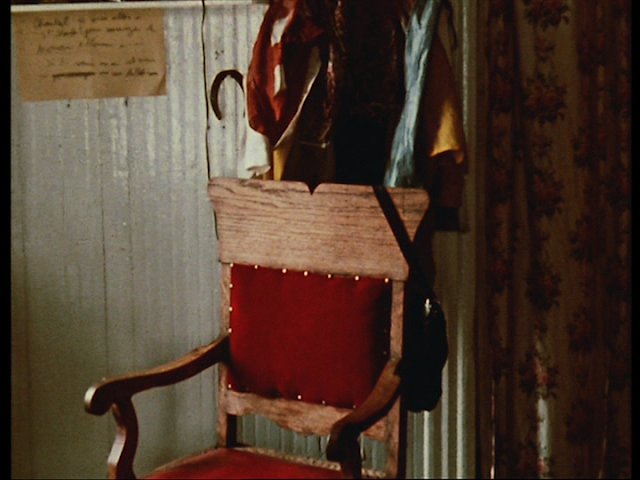 A ragged apartment is explored by a cinematic eye as a camera turns 360 degrees to explore every corner of a living space. None of the objects move, and the question of subject is deliberated by audience and instinctual camera movement. The only thing that changes in the chamber is a woman, presumably the owner of the house, who sits on a bed, stares at the camera and eats an apple. The woman is Chantal Akerman, and she is wrangling with the very ideas of how cinema functions in this avant-garde short. 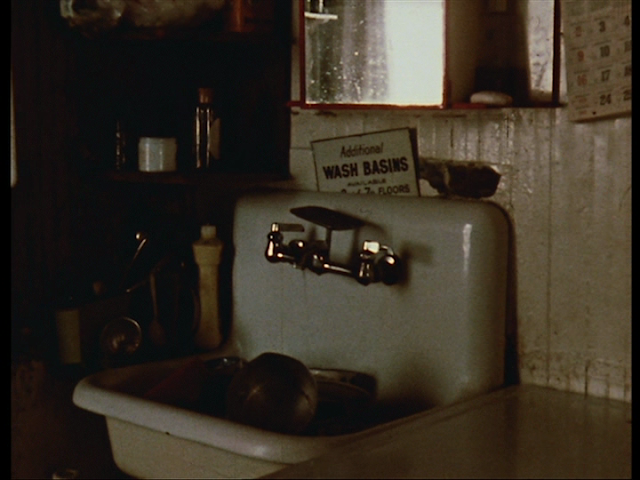 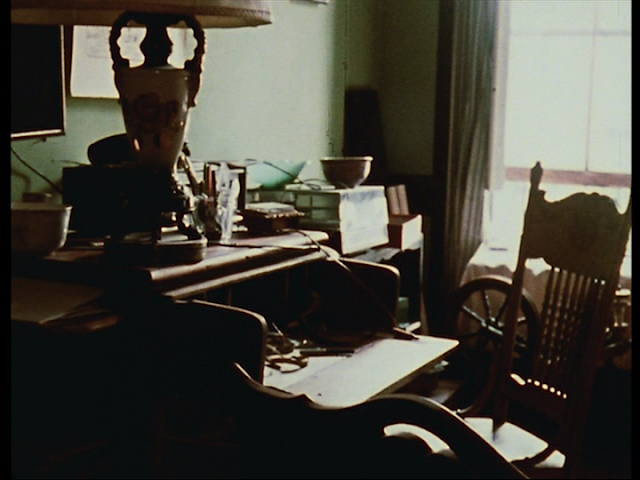 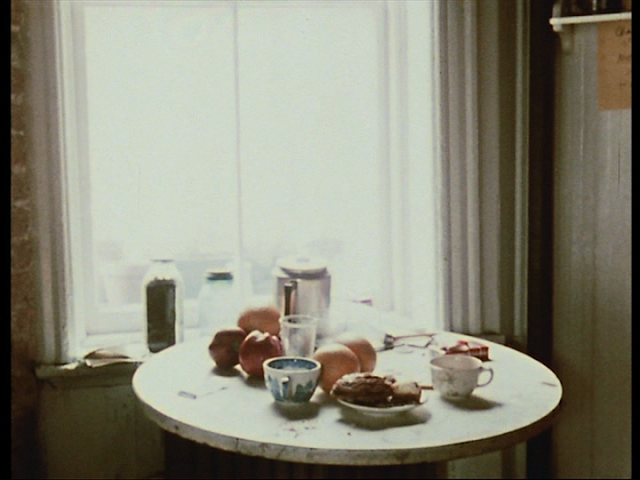 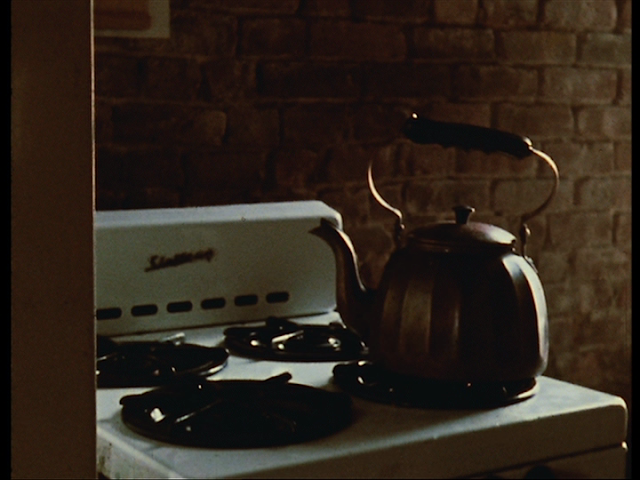 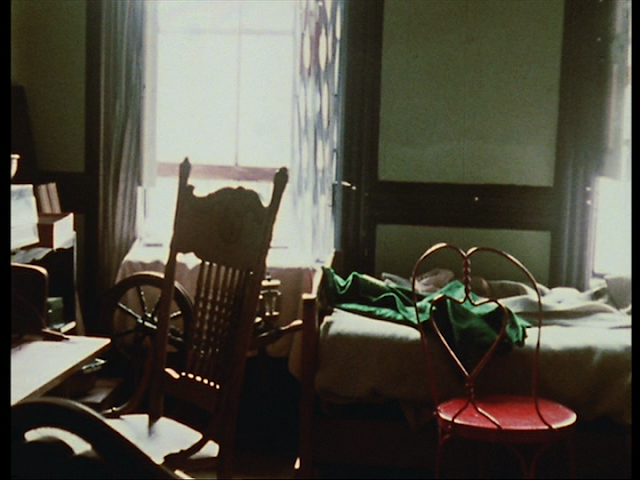 Unlike her first film, Saute Ma Ville, there isn't a narrative in La Chambre, and Akerman has begun to twist away from conventional cinematic goals into something both entirely her own, and daringly experimental. In La Chambre, Akerman asks many questions and none of them have explicit answers, but the function of the movie is to get the viewer to think of how they view cinema as a narrative art-form and how we latch onto any tidbits of information that may move a story forward. Akerman has consistently been concerned with stillness in her movies, and how that plays into realism (look at the opening third of Je, Tu, Ill, Elle for example), and La Chambre's only progression is how this singular woman moves, otherwise objects are at rest. But Akerman is just as interested in those resting objects, and her camera makes a point to frame household items such as chairs, an oven, and a dishwasher with the same priority she frames herself. The framing is meticulous, but never boring, and the images never dull due to the function of the camera's constant movement. By placing the camera in a 360 degree pan she's asking audience members to observe how the objects change, even if they don't. The only changes to the objects are in the lighting, and it's only slight, but this is something we must view, because the camera demands their importance with the same centered framing as the subject (the woman). Something interesting happens after the first couple courses around the room though- the camera reverses course as if on audience instinct to move towards the woman. The curious thing about this is why that was needed and what Akerman is saying about narrative subjects. She's just as calm as the chair we've already seen twice. Her movement isn't any more fascinating than how the light reflects off of a wall, but the camera is pulled to her, because she moves. Each repetitive movement of the camera becomes tighter and tighter until the camera keeps the woman in frame for the better part of a minute, but she remains listless as she devours an apple. When the camera finally realizes there is nothing to see here the lens pulls away from her again and the movie ends. What was the subject? Is a subject even needed to produce cinema? These questions aren't definitely answered, but explored and beg to be analyzed by viewers. 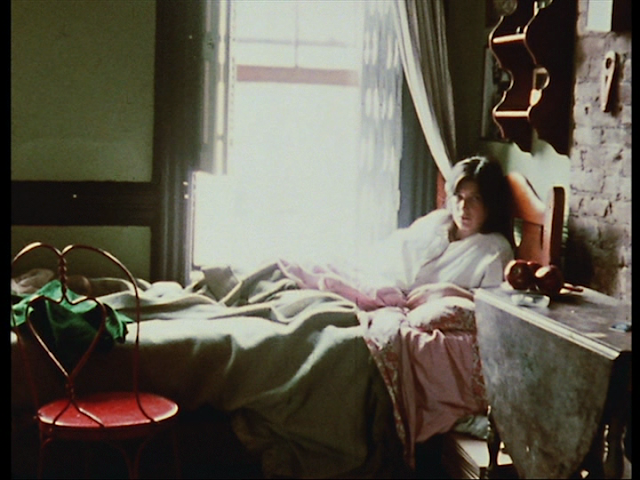 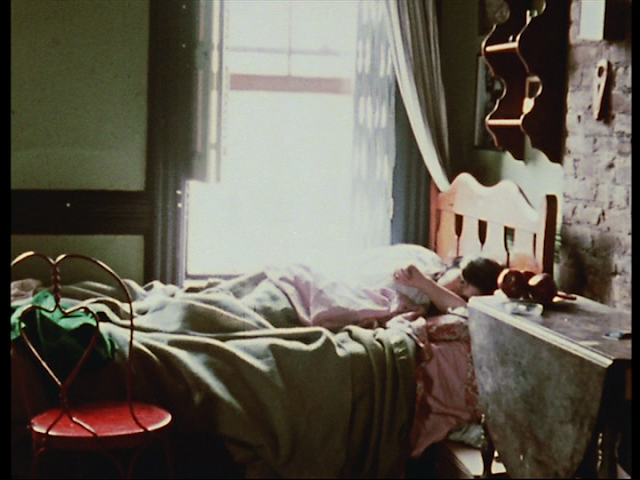 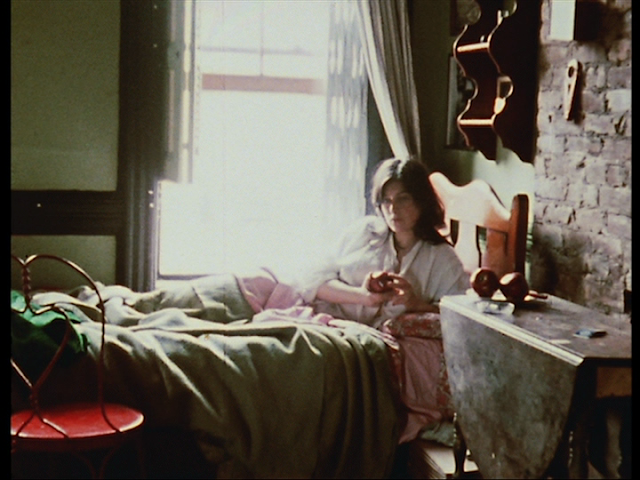 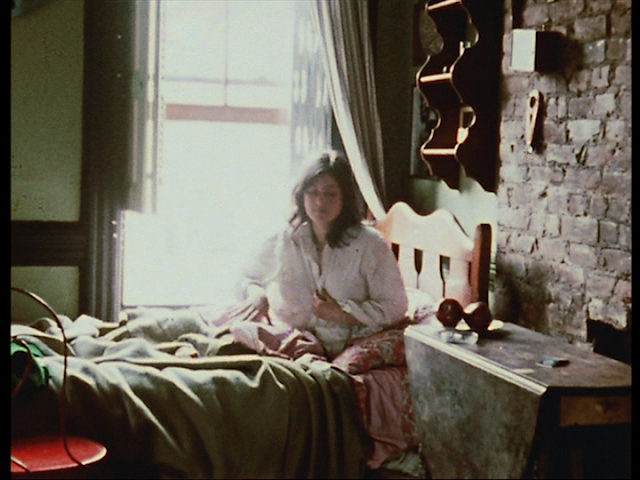 La Chambre is just the beginning of Chantal Akerman questioning how cinema functions, and offers a glimpse into more of her instinctive techniques as a filmmaker. While, Saute Ma Ville, may have been an introduction to her feminist themes La Chambre offers more in the way of what we've come to know as Chantal Akerman's form. The attention to space and how movement effects image and narrative were brought to full light in Hotel Monterey, and in that way La Chambre sometimes feels like a test run for a fuller picture, but the attention to objects, rooms and the people within them would be of fascination to Chantal Akerman throughout her career all the way up through Almayer's Folly, where she finally sought freedom from interior spaces. The interior lives of women can be seen in her first two films as well, even if La Chambre rejects any traditional narrative filmmaking technique, and positions Akerman as a subject in her films. Akerman's resolute attention to portraying women came first through portraying herself. By questioning cinema and distancing her filmmaking from a popular narrative mode she gained a reputation as a difficult filmmaker, but she's inviting you into her worlds and into herself, even if whatever she's doing is simple, such is the case in La Chambre.

you can watch La Chambre on youtube here
https://www.youtube.com/watch?v=8AGakyb3eBU

Posted by Willow Maclay at 2:52 PM