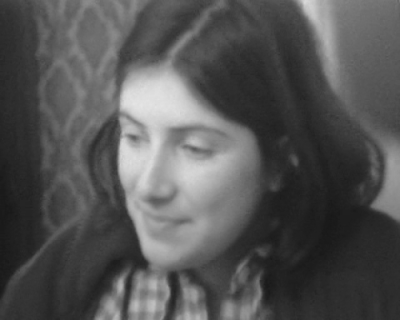 As a 16 year old not-out-yet trans girl I had little reason to leave the confines of my bedroom. I wrote in journals about the pain I was experiencing in day to day life just by existing as a false version of myself, the gender dysphoria that seemed the permanently stagnate my every move, and the frustration of knowing that I had no real home to relax in either by body or through family. This intensely introspective period of my life saw my writing flourish at the expense of my mental health, but I figured out the type of person that I was supposed to be, and how I could go about accomplishing these goals of womanhood. I also saw my growth as a cinephile become a fixture of my everyday life. I wasn't going to school, but every day I found something new in cinema to give me reason to wake up in the morning. During all of that time though I could never find something that so resolutely affected me in the way that Chantal Akerman's movies did. The first movie of hers that I ever saw was Je, Tu, Il, Elle and I was struck by the first section where Chantal moves about her apartment writing about herself, and her ideas. This felt like what I was going through at the time. The interior space, the singular experience, the personal writing, the repetition. Chantal Akerman was filming something that felt like my life. I remember jotting down "I wish I could make movies like this" in my diary afterward. This experience kickstarted a love affair I had with her work that I've never had with any other filmmaker.

In the late 2000s there really wasn't filmmaking or television about transgender characters beyond ridiculing those people or having them play corpses. Finding relatable cinema has always been a game of looking for subtext or tonality that replicates personal feelings. My queerness is insular and deeply ingrained in my body. I like to shed my skin when I engage with art and feel reborn into someone that feels prouder of who I am. The lyrics of Donna Dresch and Kathleen Hanna were scribbled all over my walls in places my parents dare not look. My little secret of who I really was, and books by Alison Bechdel brought to me tears, because she was wrangling with anxiety over herself that was a constant feeling for me as well. Chantal Akerman did the same things for me, but in cinema. Her interior worlds felt like they lacked freedom. They were jails. Being closeted was nothing short of demoralizing so to see something so deeply personal reflected in her hallways, small rooms and spaces inhabited by women not made for this world felt like my space. Akerman's cinema was more of a home for me than anything I ever lived through up until last year, and her characters were versions of myself I could see existing.

It has always been baffling to me that Akerman's cinema has been described as detached, because I have the opposite experience with her work. I think back to that quote in Jeanne Dielman about her son not understanding, because he wasn't a woman, and I think this experience could hold true for why her cinema has never been accepted into a generalized canon as much as it should, because film criticism is a field inhabited mostly by men. Akerman has always laid herself out there for the world to see. She is a deeply personal filmmaker whose cinema has always represented her life in some way. The holocaust is a running theme in her work, as much as her relationship with her mother, queerness, art, and movement. She could never be pinned down to one specific type of movie so she's often worked in both narrative and documentary, experimental cinema, musicals, romance- and so much of it vital to her experiences.

Even recently I have found my relationship with Akerman's work expanding into new areas. I haven't seen my mother in 18 months, and our relationship is fractured to say the least, but she sends me letters. She talks about the experience of losing me, and wanting to see me again. She is sad that she hasn't seen me in as long as she has, but she knows I'm working towards living my life in a way that is representative of who I am. She always ends each letter hoping to hear back from me as soon as possible. She worries. I put on News From Home the other day in preparation for a piece on her now final film No Home Movie, and I was moved by the similarities between the way my mother and Chantal's mother reacted to each of us moving away. They're so very similar and it became apparent to me for the first time that maybe this is what a mother/daughter relationship feels like. It's complicated and messy, but there's a lot of love to be shared between us. I cried at that revelation. Akerman's movies have always felt symbiotic- like they come out of some place within her that I feel personally connected to even though I never had the chance of meeting her. The type of effect she had on my life is nothing short of profound, and it has to ring true for other women.

I woke up this morning to the news that she had passed, and from reports it was a suicide. I sobbed into the shoulder of the man who gave me a physical home over the woman whose cinema sheltered me in a cinematic one. I am gutted. I feel like part of my soul was removed when I heard this news. She felt like family. I miss her so much.
Posted by Willow Maclay at 2:25 PM