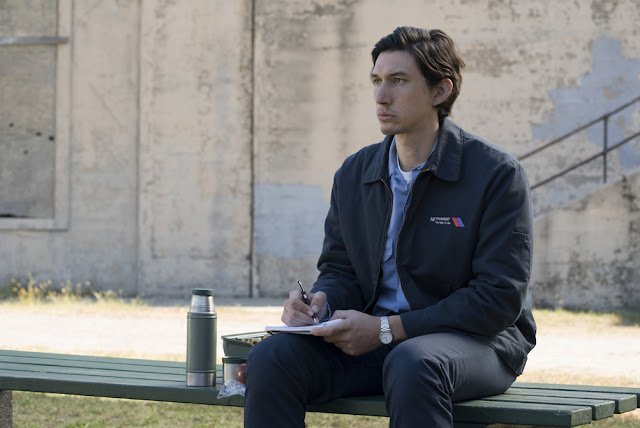 Paterson (Adam Driver) scribbles the untapped beauty of the world in his secret notebook. He lives through repetition, like most of us, with lower middle class burdens. A former marine he wakes up every morning between 6 and 7 a.m. to eat a bowl of cheerios, walk to the bus garage & write poetry before his artistic process is halted by the call of his job. But the beauty of the job is that he comes in direct contact with the far ranging diversity the world has to offer through offhand conversations of his part time passengers & the weary travelers as they too journey to their jobs. Everyone lives a life and Paterson poses the theory that we all live in beauty with minimalist grace notes from director Jim Jarmusch.

Paterson- the most stunning of Jarmusch's films since his Wuxia-Tang neo-noir Ghost Dog: The Way of the Samurai (1999)- finds its divinity through the quotidian detail of the average life. At one point our lead character comes upon a girl around the age of ten. After a relatively difficult day at work the seemingly unflappable Paterson sits with her & discusses poetry. She recites a poem of her own (a good one at that) that captures the minute details of a rainy day while playing around with the meaning of words & their textural impact (Water Falls....Some People Call it Rain). This shifts Paterson's day in a way that is seen as insignificant, but the insignificance is the ideal as Paterson is built upon the continuous insignificant moments that eventually spell out the nature of life & the grace of the mundane.

Every day at lunch Paterson  traverses to a waterfall to write poetry of his own about his interactions as a bus driver, the conversations he overhears, the objects that make up his life & the love he finds in his wife Laura (played marvelously by Golshifteh Farahani). The nature of the poet is that of an observer & that too is intrinsic to the synthesis of cinema. Paterson's observations colour his everyday life, and in turn they influence his art. One poem about Ohio Blue Tip matches only comes into vision when he notices them on his kitchen table & he morphs this into a narrative of the story within objects. In this case it is about a match whose sole purpose is to be struck for fire having a deeper meaning through the lighting of a cigarette for a first love. It's an adept observation that paints Paterson as a man of finer details both as an artist & as a human being. Jim Jarmusch, similarly, finds his own strengths as an artist in the seemingly unimportant with movies that rarely dovetail beyond plotlessness & morph into something that more strongly warrants textural and gestural evocation like the dirt in Tom Waits skin in Down by Law or the grime in the streets of New York City in Stranger than Paradise. Those too are poetic devices.

Jarmusch's film rarely moves beyond the point of view of Paterson, but through his eyes a second portrait of an artist is visible. In this case it is the restless artistic impulses of his wife Laura. Unlike Paterson she is not merely an artist of one craft, but of many. She can be seen jumping from fashion, to country music, interior decorating and baking. She is a woman who is constantly evolving, tearing down something old and summoning something new. The camera sometimes plays her exuberance for her artistic interests for comedy, but it's light-hearted & is in lock step with the way Paterson affectionately views his wife. Both Paterson & Laura are modest individuals celebrating monetary artistic success with pizza & an old black and white movie. Their relatively peaceful life is enriching in its own simplicity & mirroring effect on young people making art on a personal level outside of a system. Laura dreams for larger success, but the recognition of being told her cupcakes are masterful is enough for her to find something resembling true artistic happiness.

For Paterson, the work is the joy rather than the end result, but he finds this tested by a fissure that significantly disrupts his day to day life. The narrative crux of this movie knows that tragedy can seep into life at any moment- as is the nature of existence- and in doing so opens the film up to difficulties Paterson must face as an artist & as a human being. Throughout his week Paterson has seen many minor tragedies (the bus breaking down, the Brussels sprout pie & the gun in the bar), but nothing tests him as much as an incident involving his pet dog Marvin later in the movie. He drifts aimlessly after this moment & seems legitimately shaken up even going back to his bench by the water fall to find clarity in the aftermath of the accident. In a perhaps too cute coincidence another man sits beside him and begins to read poems from Paterson's favourite poet William Carlos Williams & he offers Paterson a gift from one poet to another.

Earlier in the film a man is hearbroken after a break-up and he tells Paterson he'll learn to be fine because "the sun rises and sets every day doesn't it?". Paterson replied dryly uttering "so far" infusing him with a certain melancholy, but he knows moving forward is essential every day even with a set back. The title card is always going to read the day of the week & he'll always wake up at 6 a.m. As long as these things remain true so will Paterson.