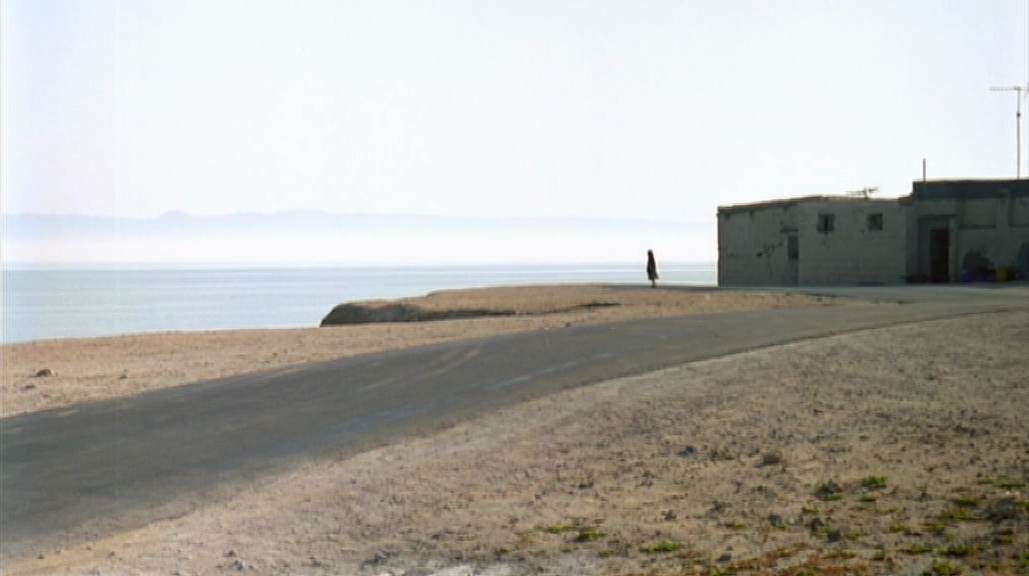 “One is not born, but rather becomes, a woman”
- Simone de Beauvoir

Simone de Beauvoir's words come to mind when viewing The Day I Became a Woman. Their philosophies are inherently linked, and while de Beauvoir's words can mean different things to different women, especially in regards to trans women, I think the root of it's radicalism is in how it analyzes socialization in a world driven by patriarchy. Meshkini's film The Day I Became a Woman is also about expectations brought upon women by simply being, and it lies in the intersection of women living in the middle east, which is a narrative that isn't as common in wider feminist film discussion. The film is broken up into three vignettes, following three different women, and chronicling all three at varying ages. It's within this linear storytelling that you get a sense for how women in the middle east have to navigate the seas of patriarchy through different stages of life, and it begins from the onset of birth, because simply being a girl you're expected to live life in a very specific way. The beauty of this film is that these girls and women have to live within these expectations, but they strive and fight for what they want. What's even greater about this is that Meshkini never loses grasp of the complexities of Iranian Women's lives in her realist lens. It's her narratives of how these women negotiate agency through oppression that truly make the film's feminist intentions important, because the film never forgoes their struggles for an easier happy ending, but it does show how they live through these difficulties. 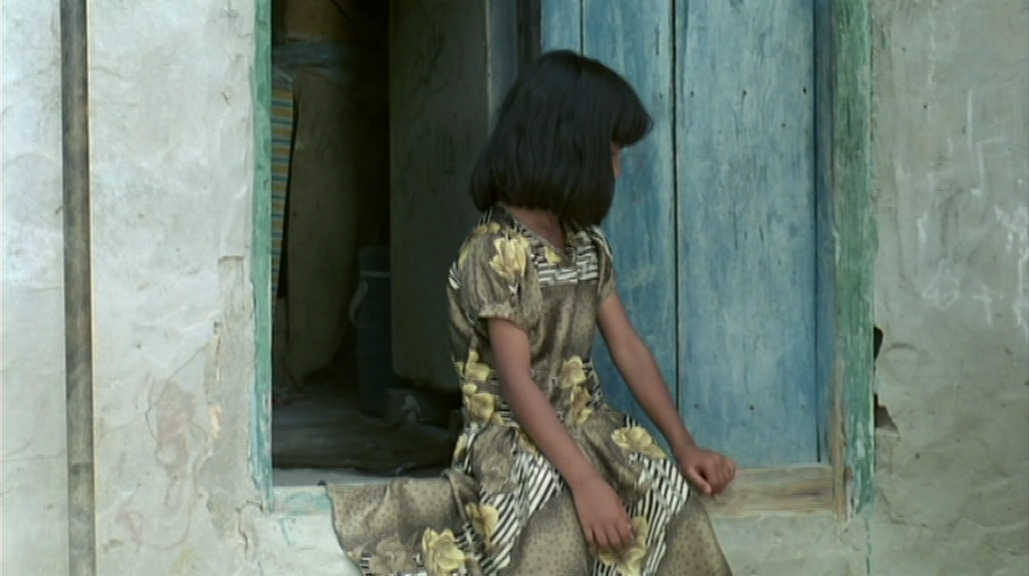 The first vignette is about a young girl named Hava. She spends most of her days playing with a local boy her same age, eating ice cream, and digging through sand on the seaside, but upon her ninth birthday she must give all of this up. Her mother and grandmother profess that she is a woman and she must put those things aside. She must cover herself and stop interacting with boys, because she's too old for these things now. Hava understands the complicated situation she is about to enter into, but she uses the last hour before her birthday to do what she always does. This segment of the picture is minimalist realism as it's subdued tone, nature and imagery are showing just how regular Hava's life is at this point. The moment she shares a final piece of candy with her best friend while they make goofy faces at each other is especially joyful. Both of them carry a childlike innocence, and for Hava that's about to end simply because she is a girl. The image of Hava being framed around what look like prison bars is the only moment where this vignette goes beyond it's subtleties into something more blatantly political, and it's one of the stronger images in the film. The stories final moments of her ditching her chador so other boys can build a sail for their homemade ship is perhaps an allegory for her rejecting the kind of role she's expected to engage in, but it's all just vague enough that Hava could have simply done this because she's good natured and willing to help out her friends, and by making it vague Meshkini implies that those women who do accept the chador are not inferior. 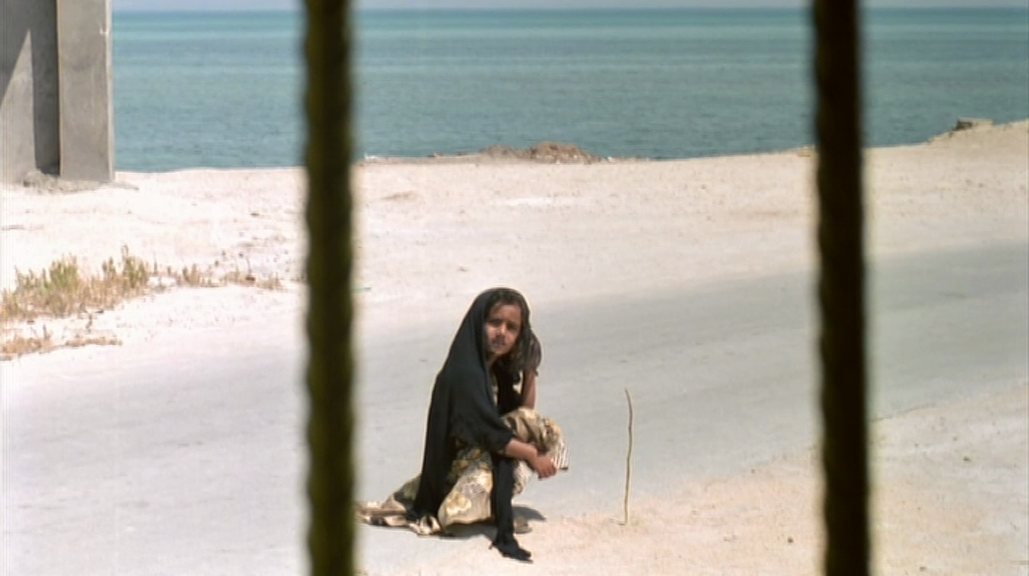 The next woman (Ahoo) featured in this movie is in much more dire straits as she's being followed by the men in her family on horseback. She has entered into a bicycle race with other women, and her husband forbids it. He follows her (filmed in Meshkini's dazzling tracking shots) and shouts back at her that the devil has control of her. Meshkini frames Ahoo's determined face as she ignores her husband, and actress Shabnam Toloui's stoic, exhausted expressions spell a narrative of draining sexism. This bicycle race is allegorical to her running away from those constrictions of her marriage and family, and it's even more striking that this is specifically a woman's race so while she snakes in and out of competitors the image is framed by these women in chador's barreling forward towards something. Maybe freedom. Maybe just a sense of having completed the race. This story is the most accomplished of the three from a visual standpoint as Meshkini works in long shots, longer takes, aerial work, close ups and tracking shots to get as much as she can both out of this race and the movement of this multitude of cycling women. The segment ends with the men of her family running her down and taking her bicycle from her as shouting can be hard in the distance. The image moves further and further away from them and the question of whether she finished the race is left completely up in the air. 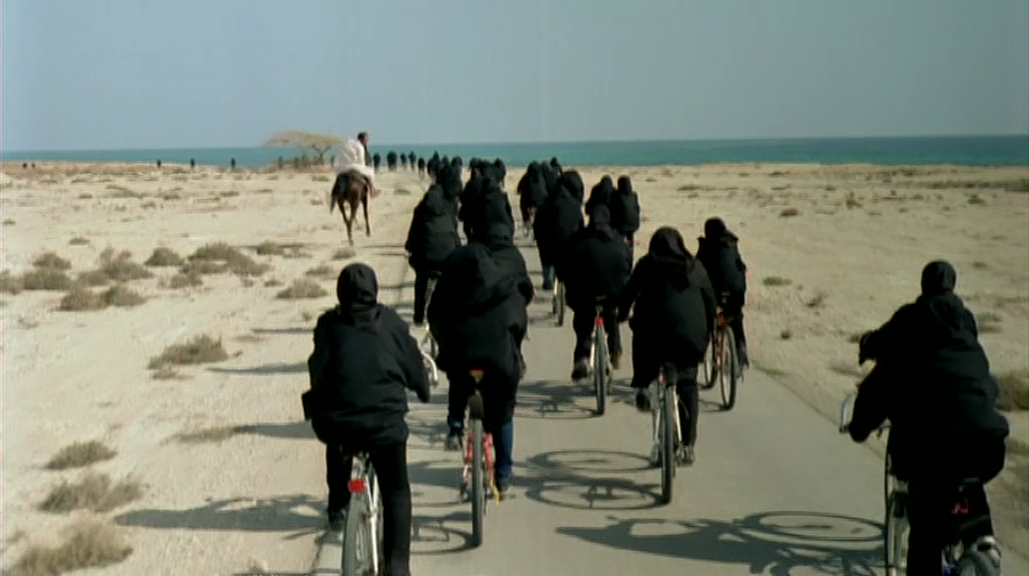 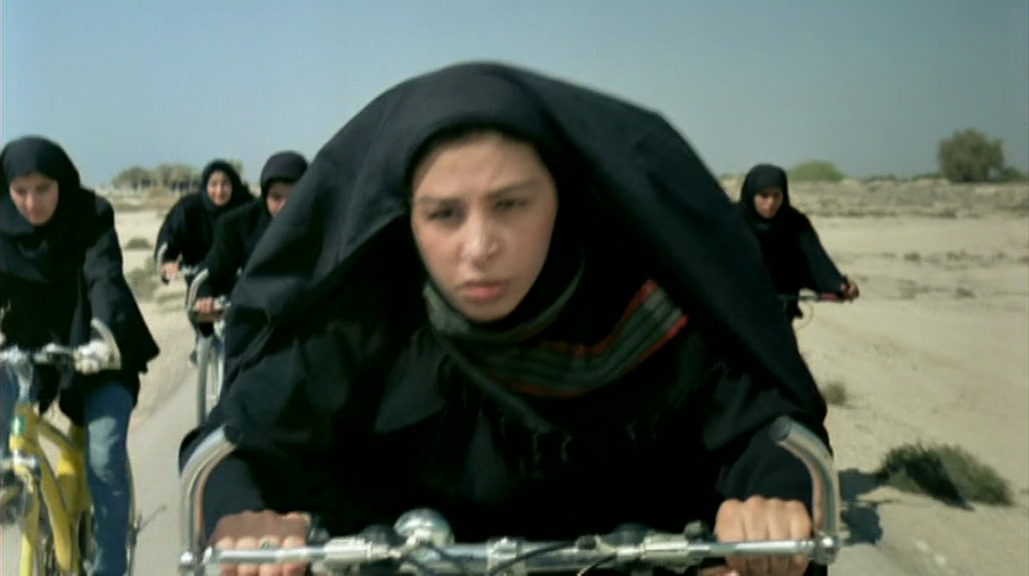 The final entry focuses on an elderly woman and her desires to finally acquire the material possessions she always wanted in her life. It is in this narrative that the film lets go of it's burdening realism and goes into the fantastical, and for this woman it's a kind of happy ending she always desired. Once she purchases all of her items (a fridge, a dresser, a bed, a television) she settles on a beach and treats the sand as home. The boys who helped carry all of her items there play with everything she purchased including makeup and dresses, and it's all very rogue in the face of middle eastern gender roles. If anything the films mission statement would see those freedoms to be of utmost priority, and the focus of happiness those lessening burdens of gendered law have on these people. The film eventually wraps around back to the first girl. Hava sees this older woman getting what she wants and as she sets off for see Hava, cloaked, stares at her. It's a beautiful moment of realization for one girl who has just become a woman in the eyes of the society she is growing up in, and the freedoms expressed by this older woman, even if they are simply material, are something she can gravitate towards. 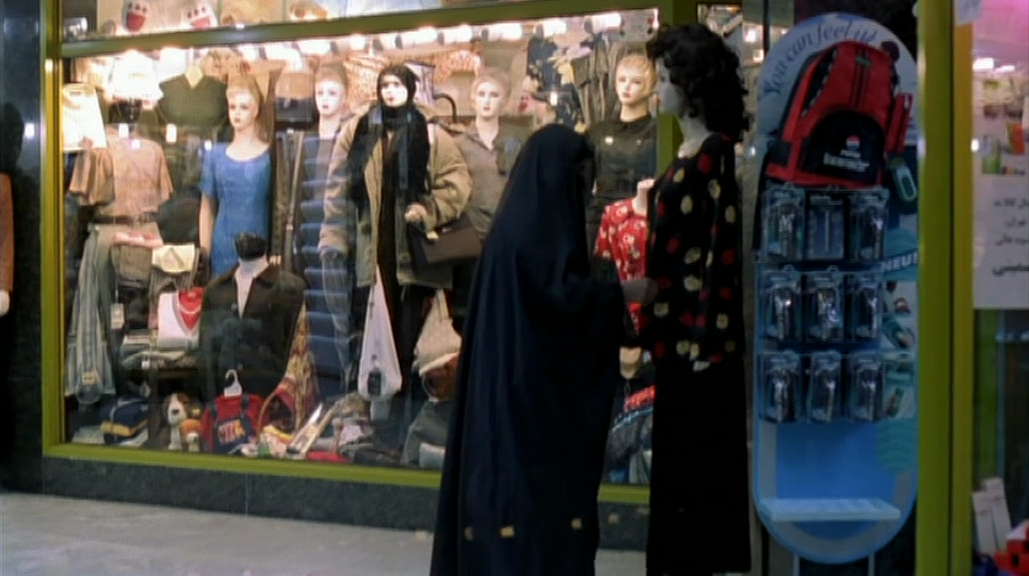 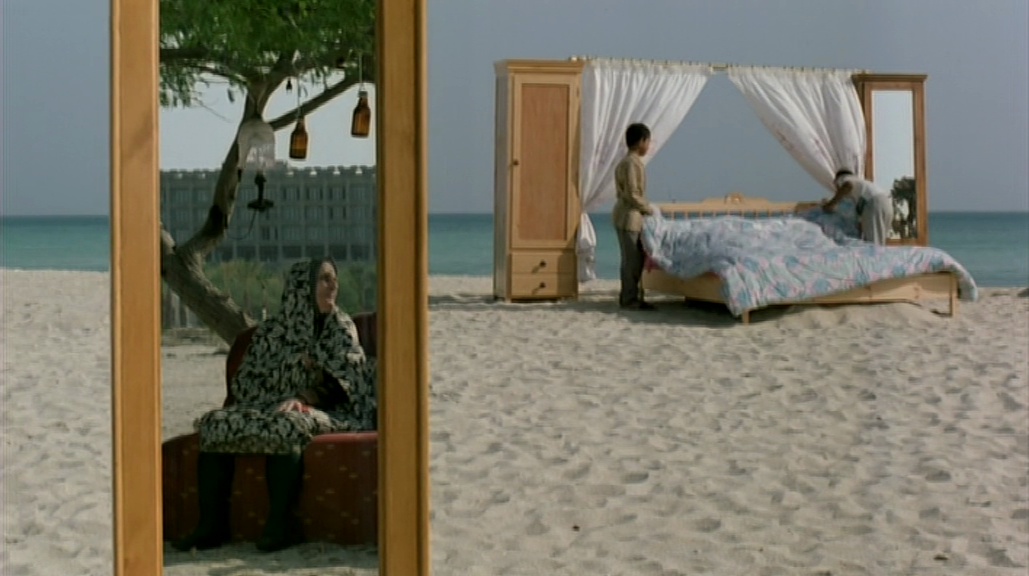 The notion of the feminist film is often bastardized to mean anything featuring women in significant roles, and while I agree that representation matters I think for a film to be feminist it has to have the intentions of unsettling something in culture through art. The Day I Became a Woman is truly feminist in these regards. Meshkini never damns the women in her picture for the sake of saying one way of life is better than another, and her lens simply exists to give these three women's stories a place to be told. The film is expressly political in it's intentions, but more than just being about a woman's place in society it's about life as a woman. Often the film veers off from this trajectory to linger on a moment. Hava shares candy, Ahoo looks into the eyes of another competitor in the bicycle race and shares an understanding, the elderly woman talks about the twist ties on her hands. The film is fiercely political and stridently feminist, but it's also an empathetic, and marvelous look at women. That's the film's greatest achievement. 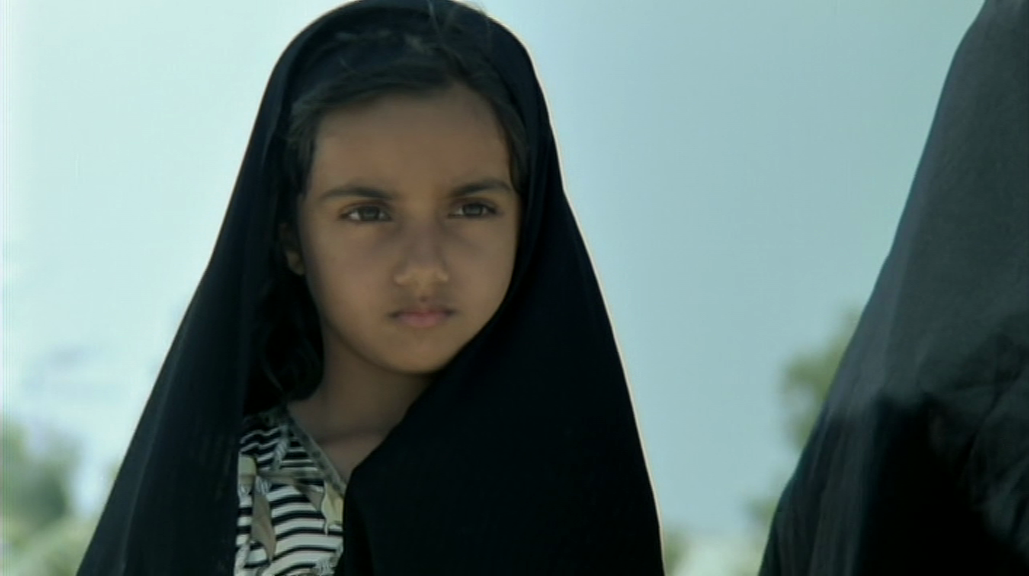 Posted by Willow Maclay at 3:43 PM