Rachel Talalay wanted to make an action picture that was like nothing else currently on the market. She was fed up with the idea of female action heroes whose characteristics were identical to that of men, but transferred to a female body. She loved the Tank Girl comics and with it saw a chance to make good on that promise of a completely unique woman action hero with an adaptation of that text, and in some ways she completely succeeds, but the film as a whole suffers from some unfortunate pacing and narrative decisions that nearly undo an incredibly unique character. 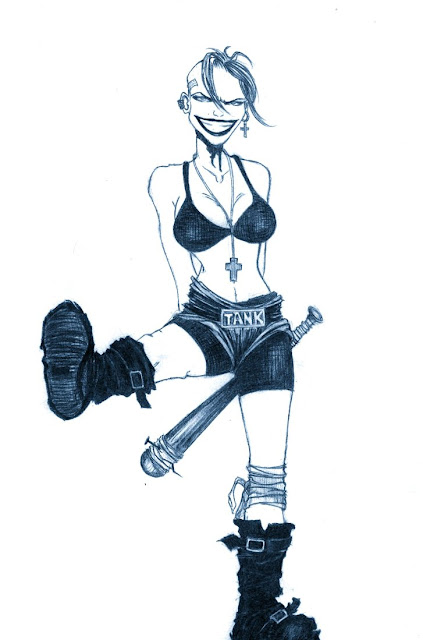 The 1990s saw a birth of grrrl power and riot grrrl aesthetic that informs the type of character Tank Girl exists as. Part Wendy O. Williams and Mad Max with a riot grrrl mix tape in her walkman the titular character is a punk ideal while exhibiting the same underground comic aesthetic she was birthed from in the 1980s. To say the least she carries the entire world of her movie on her back, and the film lives and dies by her frequency on screen. Lori Petty perfectly encapsulates the kind of character Tank Girl needed to be and appropriately sets herself apart from every other woman character in the history of the comic book to film medium. Often, women characters are relegated to being love interests even in the best comic book adaptations (Spider-Man 2, Scott Pilgrim vs. The World) , but this is Tank Girl and this is 100% her movie up until the narrative is blindsided by a handful of Kangaroo mutants (who are present in the comic) who I would lovingly refer to as Jar-Jar's by just how much they disrupt an otherwise good movie.

Tank Girl is at it's very best when it is loosely jamming many different parts of cinema (comic book animation, dance sequences, music video montage) together into a jumbled mess that fits the kind of thrown together look of the titular character. Riot Grrrl is an easy thing to come back to when discussing the form here, but the collage like nature of Tank Girl is reminiscent of zine culture that came out of Olympia, Washington in the early 1990s. Tank Girl's feminism is most present in how the main character carries herself, and as a production it's one of the few pictures of the time that seems actively influenced by the form of riot grrrl music and art. It's ironic then that Courtney Love was the mastermind behind the soundtrack as she always kept the genre at arm's length due to the limitations of the genre's Stepford quality in bands cannibalizing each other and none of them being able to stand apart, whether that be true or not is an entirely different issue. Sprinkled throughout the set design are even more remnants of that music's influence on the preceding's as "Lunachicks" stickers are taped all over Tank Girl's hideout. This all mirrors the look that Arianne Phillips put together for the lead as her ripped stockings, paint brush fingernails and goggles is a constructed look that exists totally for the inner self of Tank Girl and no one else. Her clothes don't really match, they don't fit perfectly and they are tattered, but it completely works, because really there are no rules as to what is or isn't an acceptable look, and if her clothing wasn't optimal it would betray the attitude Petty gives off in her performance. It's similar to another film I looked at earlier this year, Desperately Seeking Susan, where so much of the film's visual language comes from the fashion of Madonna. Both of these film's wouldn't work nearly as well if the clothing wasn't on point, but in both cases these characters became fashion icons in distinctly different ways.

I'd be remiss if I didn't mention Naomi Watts (Jet Girl) whose short time here accompanies Lori Petty's performance remarkably well. Watts is a side character but as a Velma to Daffney or even Jane to Daria she is absolutely perfect, and their friendship works so well because they're extremely different from one another, but end up banding together and bonding to survive through the post-apocalyptic wasteland  of Australia (also centered around water if you want to get back to Mad Max comparisons). Malcolm McDowell seems to be having fun as well as a tongue in cheek villain who literally would dissolve his henchmen into water and drink them on sight to intimidate his fellow employees.

Tank Girl cannot sustain it's eccentricities, energy and formal decision making throughout though, and as Talaly described, studio edits ran amok of her vision. I truly believe her, as the third act sees a detour into silliness that doesn't really feel tonally acceptable to the first two acts. Jet Girl and Tank Girl take a detour to stay with the rippers (The Jar-Jar's) for a while and the movie gets side tracked and slows to a crawl. The narrative leans further away from Tank Girl and Jet Girl and the movie loses complete grasp of pacing and trudges towards the credits until finally things are resolved and Tank Girl rides off into the sunset. Talalay also struggles with shooting competent action so the final third isn't in her forte of zingers, verbal comedy and music. As much as I dislike the last 30 minutes of the movie though the first 90 or so showcase something that Talalay truly wanted to make, and one that feels unabashadly 90s in a way that situates itself firmly in a time of third wave feminism. Today's comic book heroines could learn a thing or two about how Tank Girl carries herself......even though I'm pretty sure no studio would be willing to greenlight a superhero character who happens to be a woman, and give her this much freedom twenty years later, and knowing that regression makes me sad. It also makes me appreciate Tank Girl despite finding it heavily flawed, because there really isn't anyone else like her.
Posted by Willow Maclay at 7:13 PM