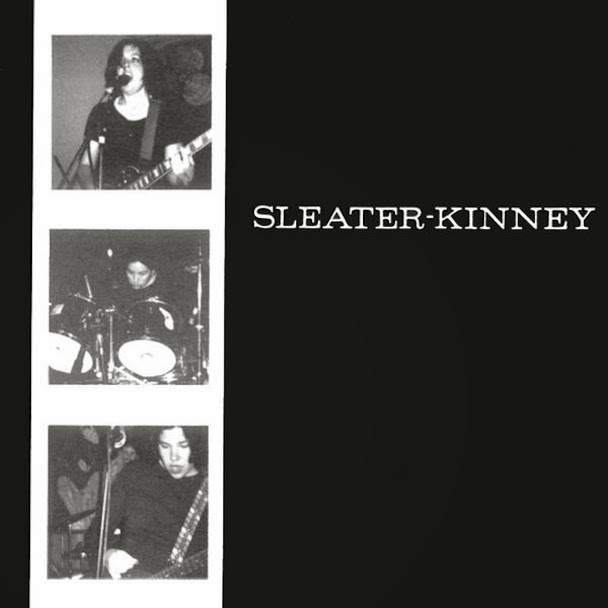 I don’t think there is any argument that Sleater-Kinney’s debut album is their weakest. It really isn’t even as good as previous LP’s by their former bands Excuse 17 or Heavens to Betsy. This album found Sleater-Kinney still honing in on their sound, but for the most part everything is all here. The riffs that play off each other, the harmonies of Carrie Brownstein and Corin Tucker, and the lyrics that made personal experiences into something political are all on Sleater-Kinney. They would just get better and better as the years went by, but this is a damn good start, and a touchstone record in the riot grrrl genre.

I mentioned in the last entry that Sleater-Kinney would not often categorize themselves as riot grrrl until later in their career. In 1995 it was an important movement that had sadly been hijacked by corporations and turned into more of a buzzword for fashion than feminism (something they would talk about on #1 Must Have years later). Sleater-Kinney’s roots were in riot grrrl and it’s never more apparent than their first album which could be used as a definition for what the genre is about both musically and lyrically. It has everything from the shoestring production, the raging voices of women, lyrics that centered topics like abuse and oppression of women. It was definitely a riot grrrl record.

The album begins with Don’t Think You Wanna which is a vague song where Corin speaks about Angels and regret which would not have been out of place on a Heavens to Betsy album. There are a lot of shorter songs on this album that feel more like the band figuring out how to make music together and this is one of them. It doesn’t feature the harmonic qualities of their best moments which makes it a little forgettable. However, they move right into their first bona fide classic song after Don’t Think You Wanna. The Day I Went Away is about leaving. Sleater-Kinney have always written songs about departure of relationships and family with an added twist of frustration due to lack of love (One More Hour on Dig Me Out). This song has all the introspective sadness that Sleater-Kinney is so great at. Carrie pleas in the bridge of the song “please remember me” as she leaves. From a structural standpoint it’s much more advanced than some of the more punk numbers on here that come and go in less than 2 minutes. Corin and Carrie doubletrack the vocals at the end of every line and in doing so the song feels massive. They would get more complicated in how they would mix their voices on the next album. The Day I Went Away was one of the first Sleater-Kinney songs I gravitated towards, because I wanted so desperately to leave a town that was too small for my life. I don’t necessarily think the song is about a relationship between a parent and child but that’s how I took to it, and I still come back to it when I feel lost and frustrated over the fact that my own parents are never going to understand why I can’t be the person they want me to be or live in a place that would reject me. The best songs are those that have personal attachment. This is one of those songs.

A Real Man calls back Bikini Kill’s Sugar from their 1993 album Pussy Whipped in its lyrics. I fucking love riot grrrl songs that take aim at the idea that women are tools for male pleasure. I loved when Kathleen Hanna sang Oh baby you're so good, You’re so fuckin’ big and hard, You’re such a big man, You’ve got such a big cock, Push it in deeper now, oh deeper, harder, I’m almost cumming, as a total lie. Corin has her own Kathleen Hanna moment here as well when she sings Don't you wanna feel it inside, They Say that it feels so nice, All girls should have, a real man and then responds with I don’t want your kind of love. It’s a powerful statement, and while it may not be the great song it’s something that punctuates the feeling of all riot grrrl albums. 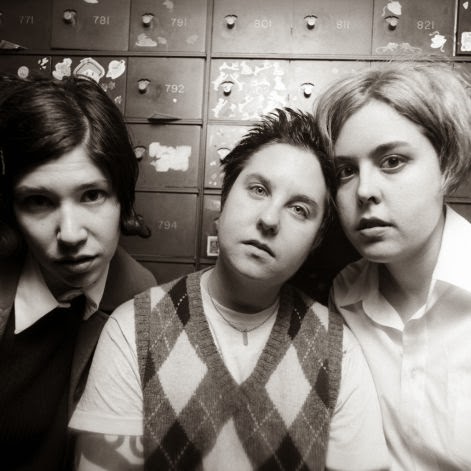 If there’s one recurring theme on Sleater-Kinney’s debut album it’s a feeling of damage in the midst of strength. The guitars sound muddied and broken, only to come alive in choruses to fight back with sharp edges to their sound. In a way the vocals take on this same quality where Corin or Carrie talk-sing only to scream at the right moments. HerAgain is a song that epitomizes all these qualities. There’s a feeling of sadness that engulfs this song and many others here. I think it’s one reason why I loved this album from the start. Joy Division’s totemic sadness was never something I could relate to, but Sleater-Kinney was something that clicked. Their music fights back on sadness instead of wallowing in it. Corin’s voice is aggressive here and when I was younger I needed something to voice my frustrations and her voice was everything.

The middle of the album has the band running back over themes of sex in How to Play Dead (Carrie's take on "A Real Man"), Sold Out,  and Be Yr Mama. What’s especially great about these songs is the guitar work, and it is at its most playful and complicated on Be Yr Mama. The band would make this song a live staple and it’s easy to see high with its high energy and the escalating riffing from Carrie and Corin.

Slow Song is my favourite song on Sleater-Kinney’s first album. Music is at its most important when it can reflect a personal feeling in a person. I think that is what makes it feel more personal than other art forms. Your favourite bands and songs become a part of you. I don’t know how many times I’ve listened to Slow Song. It was on every Sleater-Kinney playlist I ever made. There is one line in this song that on paper seems so simple, but the lyric has always struck me as huge (there’s a similar moment on Don’t Talk Like on The Hot Rock). That line is “feeling so down, I’m feeling so down” and it’s just a moment where Corin spoke for me. She does that often. I don’t even know why this song is important to me. I’ve never been able to figure out why this song latched onto my soul. It’s just a slow song.

Laura MacFarlane’s tenure in Sleater-Kinney is rarely talked about, but she was their drummer on the first two albums. Most people associate Janet Weiss with Sleater-Kinney when they think of drummers but Laura came first and she was always solid. Lora’s Song is the only song where she sang lead vocal, and it’s kind of awesome. She has a very different voice than Corin or Carrie, but it’s powerful nonetheless. The chorus is especially strong when her voice seems to break free and soars. It would have been interesting to have seen the future of Sleater-Kinney as band with three rotating vocalists but it wasn’t meant to be, and I wouldn’t trade Janet for the world.

There are three classic songs on their debut album and the last of these is The Last Song. It is also one of the very best songs in the history of riot grrrl. It’s a song about breaking free of a harmful relationship. It’s closure in the screaming, gnashing, powerful voice of Carrie Brownstein. She gets final say in how this ends and tells on the person that was hurting her. It’s the greatest personal as political moment on Sleater-Kinney’s first album. It deserves a place on any riot grrrl best of playlist as well as Sleater-Kinney.
Posted by Willow Maclay at 3:49 PM