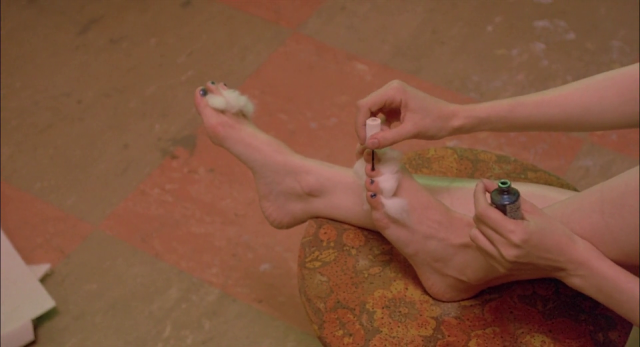 I stood, staring in the mirror at a Target in Philadelphia after I slid on a pair of ripped skin tight jeans and a simple blue and white stripped top with an open neck and it felt right. I had been wearing clothing cut for girls since I was a child, but I always did it in secrecy and it was never something that I had actually picked out. It was always clothes belonging to my mother, exaggerated Halloween costumes or dress-up with the few friends I had who I could trust with my being a transgender girl. The instances of trying to find an appearance that lined up with how I felt internally when it came to gender was never something resonant in the clothing I tried on until I bought some myself with my own money. I dove into fashion very slowly, but it didn't take long for me to figure out that I loved the idea of clothes mirroring my personality or my mood. I didn't jump in head first and buy dress after dress or layer up with earrings, necklaces and other accessories, because I'm still a very jeans a tee shirt kind of girl, but the power within finding yourself and your identity through clothing and finally reconciling a part of your gender identity that had long been denied was powerful. Those jeans don't fit anymore, and I hardly ever wear that top for the same reason, but I don't think I'll ever get rid of those clothes, because they were "me" in a time when I was first finding myself, and when I was figuring out what kind of a woman I wanted to be. Fashion has been a huge part of that. Now, whether I'm wearing skirts or jeans, black or white, flats or heels I'm always myself, and that freedom was resonant in the first year of my coming out. Now clothing is just a normal everyday part of my life, but I still get a thrill out of finding something that is so resolutely me that I must own it, or at least try it on, and I'm still obsessed with gazing at clothing.

What I find most interesting about these two Susan Seidelman films is their insistence upon fashion being a defining characteristic for these women and for her lens. 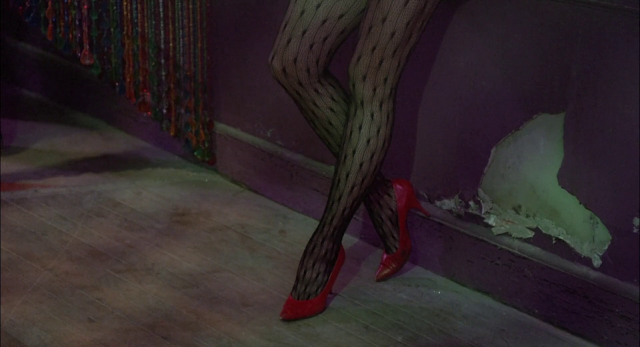 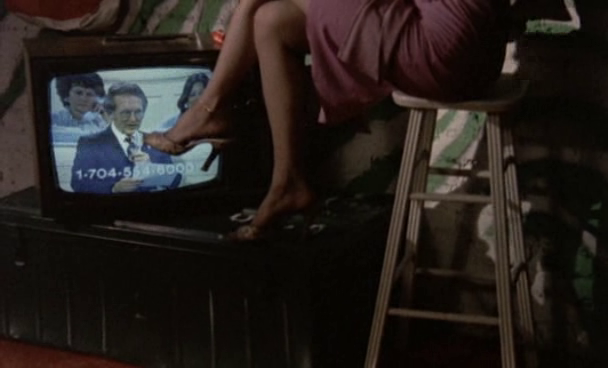 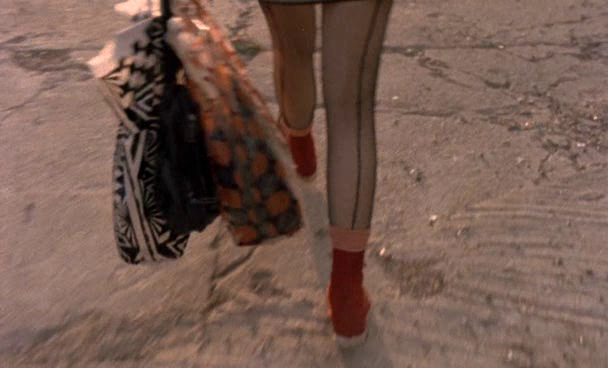 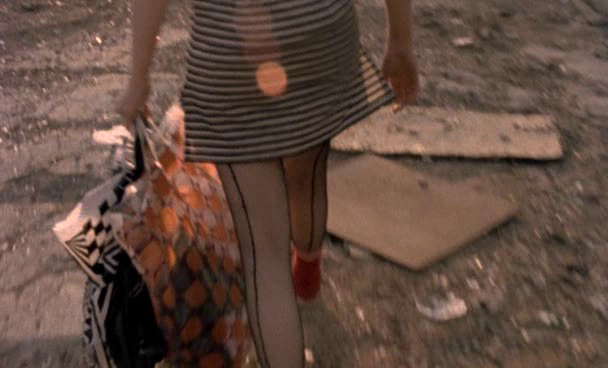 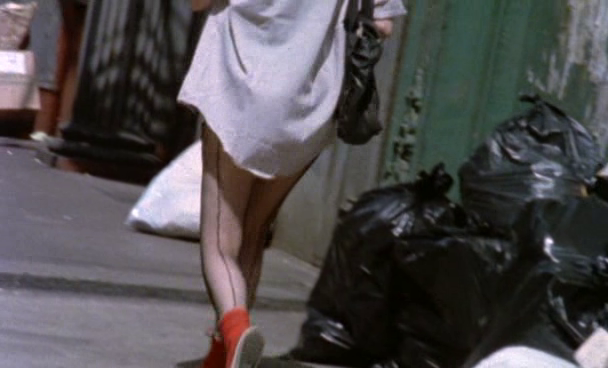 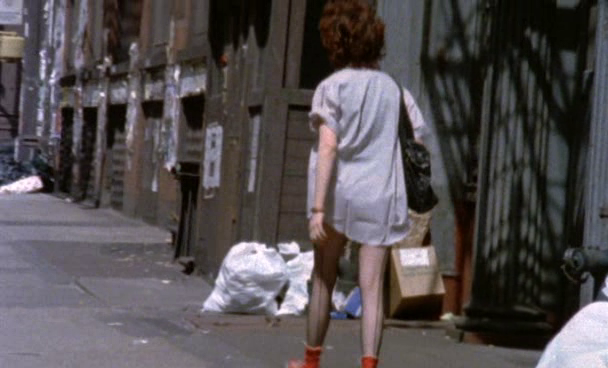 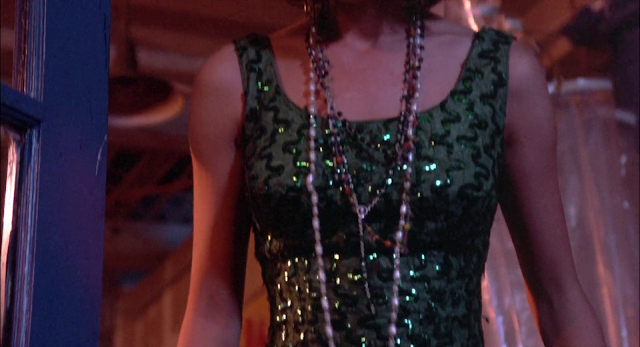 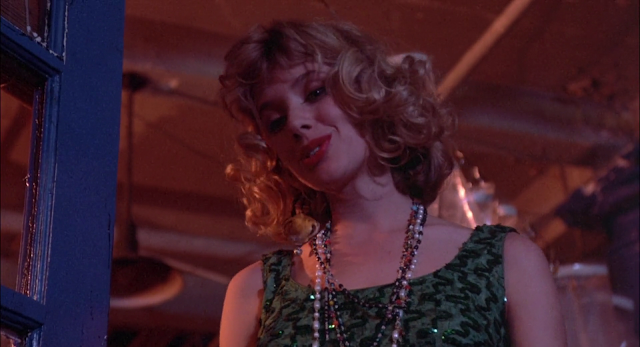 When Seidelman shoots her characters often times it is from the feet up, but it's not about a sexual gaze or the leering of bodies, but instead it's to get a full look at an outfit. Her lens becomes a mirror that moves from heels to hose to dress to necklace to make-up to hair, and it's almost always shot through the eyes of a character who happens to be a woman. There's a lovingness in gesture towards this camera movement that screams "Look at this outfit!", that personifies a covetous feeling that is most present in Desperately Seeking Susan's role model as New Wave Goddess imagery through Madonna, and it's entirely about the ensemble instead of the body which makes Seidelman's lens feel intrinsically linked to clothing. In turn this makes the way she shoots women to feel both a celebration of women and femininity. 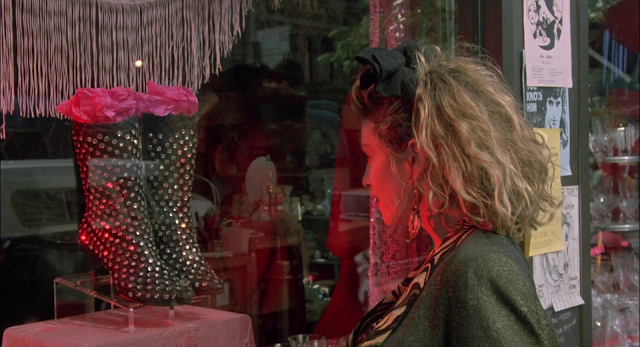 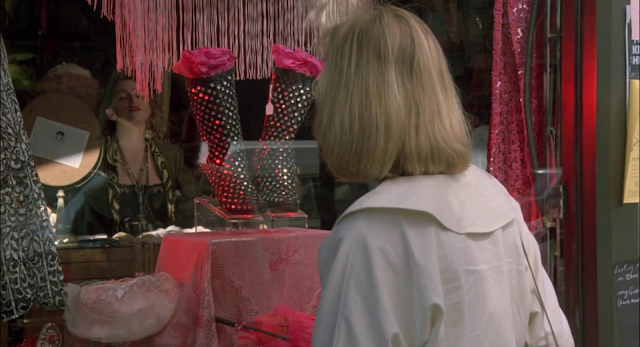 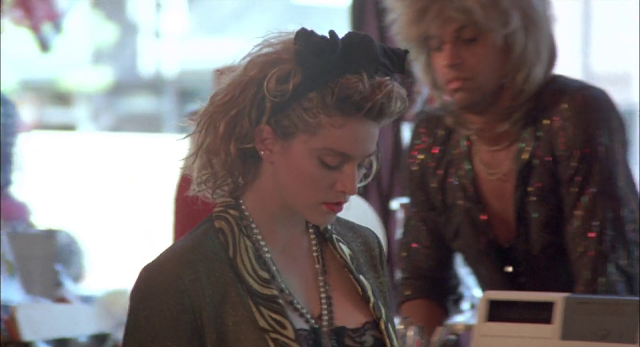 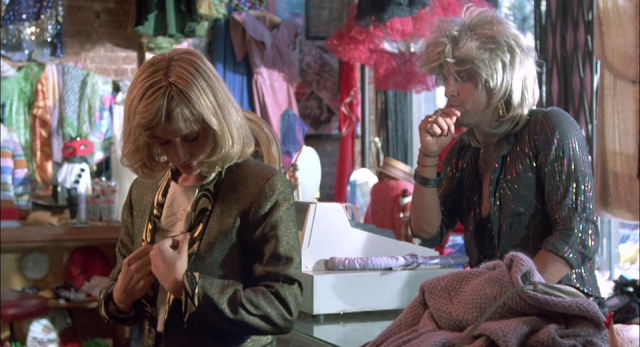 In Desperately Seeking Susan Roberta (Rosanna Arquette) is a housewife stuck in a boring marriage reading books about unlocking her sexuality and trying to figure out how to love herself. She gets swept up in the romanticism of following a woman who seems to live the life she wants in the classified ads containing the oft repeated phrase "Desperately Seeking Susan". Who is Susan? What does she have that I don't? When she finally runs into Susan she's the embodiment of everything Roberta is not. She's carefree, cool, in complete control of her life, and rebellious in a way that that Roberta seems to want. So she follows her constantly and begins to adopt her look to get a taste of what these clothes feel like, because if she couldn't be Susan she could at least feel like her through clothing. She even goes as far as buying a jacket that once belonged to this chic-woman of the street, and begins to feel like herself after she adopts Susan's wardrobe. This isn't that different from finding yourself through pop culture or your look through women in television which is something I've often tried to repeat myself with the likes of Lorelai Gilmore from Gilmore Girls, because I too was looking for myself through the fashion of another woman. I wasn't happy until I finally started being myself, and that wasn't until I started to try and adopt the characteristics of fashion from someone whom I admired. It took a long time, but I found my own voice, and the accessories that ended up becoming Willow Maclay, but there still remains hints of Gilmore throughout my look. The pink coat below being one such example. Roberta does the same thing with Susan. 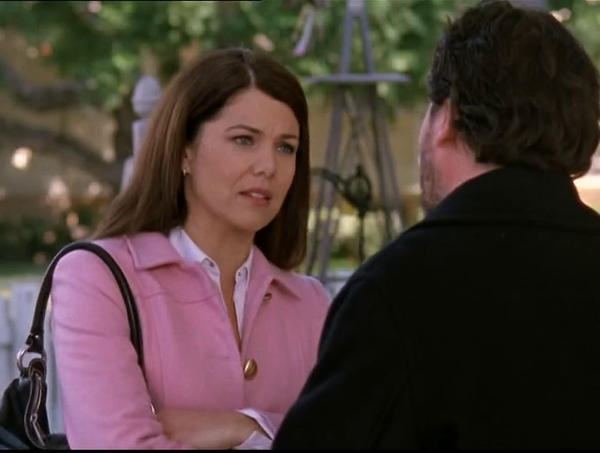 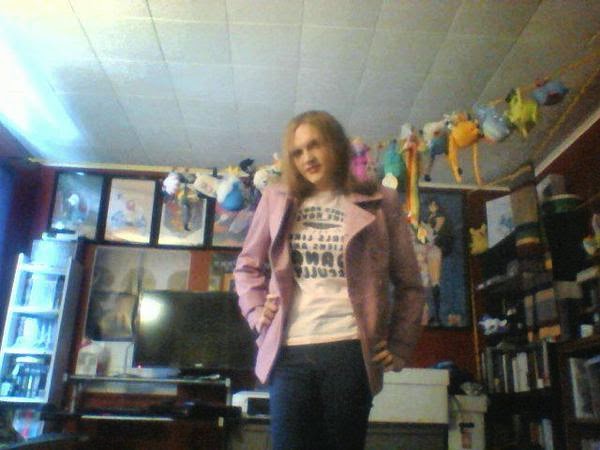 Smithereens and Desperately Seeking Susan also share women who break out of the screen through effortless cool with Wren & Susan respectively. Both of these women become models of affection towards everyone around them, because both the characters in the movie, and audiences are drawn to how comfortable they are within themselves & the "boom" of their look. Wren and Susan stand apart within crowds due to their fashion, but also how they carry their fashion. Notice the differences in how Roberta and Susan wear the same clothes, but the clothes do not have the same power for Roberta, because she's unsure of herself until the very end of the movie, but with Susan she controls every pair of eyes in the room with her sparkling boots, and dissonant black/pink ensembles. Wren is less put together than Susan, but that's also a part of who she is, and just as effective. Her look seems to be haphazard which is perfect for the dying NYC punk rock scene she inhabits, and those oversized t-shirts, dresses, Blondie sunglasses and ripped hose aren't anything different from what everyone else is wearing in the movie, but she carries it like she's the greatest rockstar in the world. So does Susan, even when she's drying her pits in the ladies room. 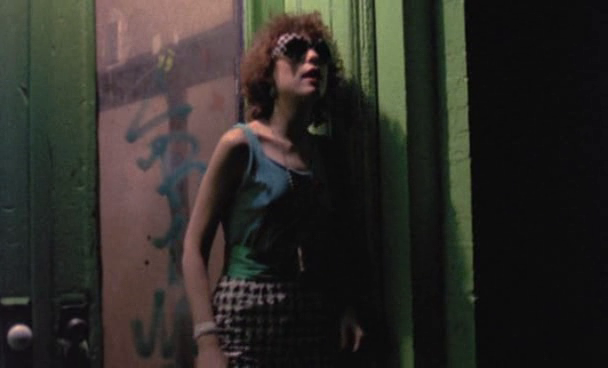 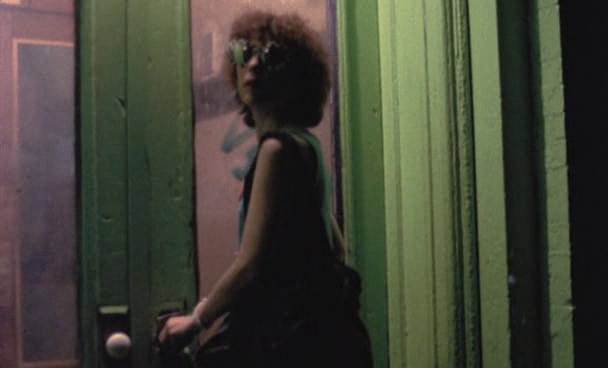 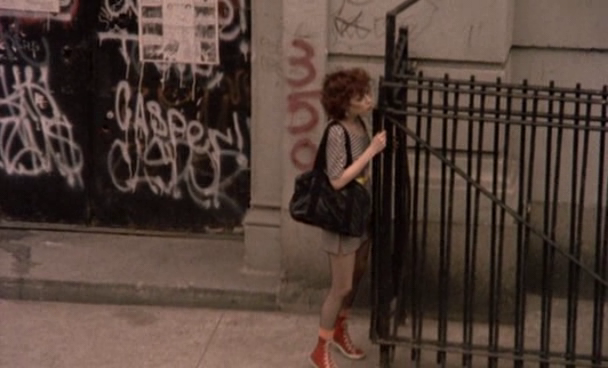 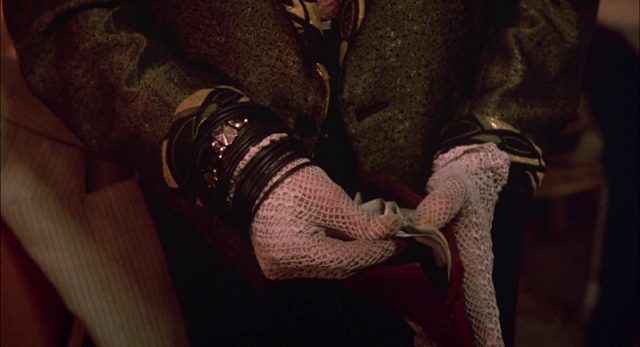 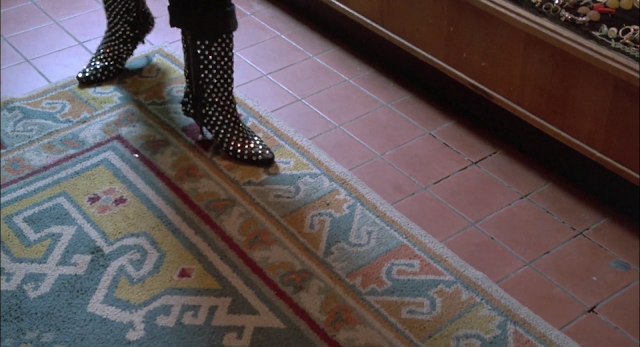 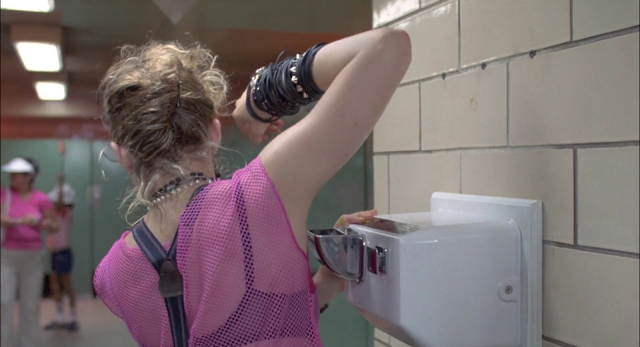 To put it very simply Wren and Susan completely control how they're presented, and even if their looks seem very devil may care they are always precisely on point, and that is what draws audiences and people alike to them. 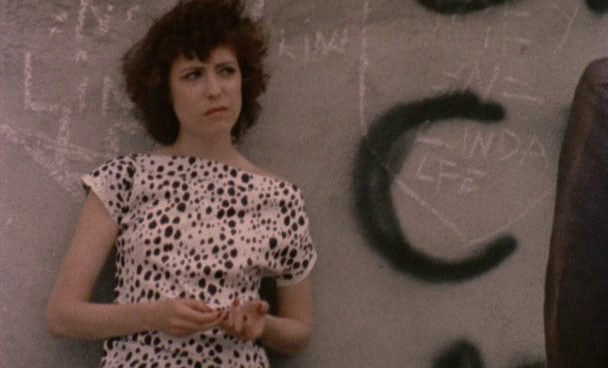 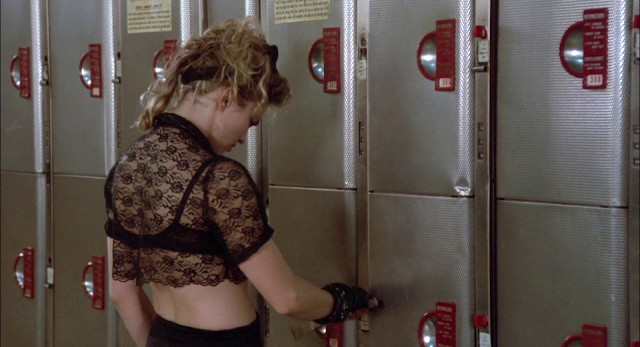 Susan Seidelman's first two movies are also ahead of the game in terms of Selfie culture, and once again Wren and Susan are the focal points of this activity. Wren plasters her face all over punk clubs in an act of self promotion, but in the comfort of her own living space, and even others, she is not shy to take out a polaroid camera and take a picture of herself. This isn't an act of vanity as much as an act of self confidence. Susan similarly carries around a polaroid camera and takes snapshots of her appearance whenever there's blank spaces in time. The Selfie as a revolutionary act of self love for women specifically who are constantly told by society that their appearance isn't good enough, is something I adhere to so it's interesting how this is captured in a movie as early as the 80s, and being done by women as cool as Wren and Susan. The Godmothers of the Selfie if you will. 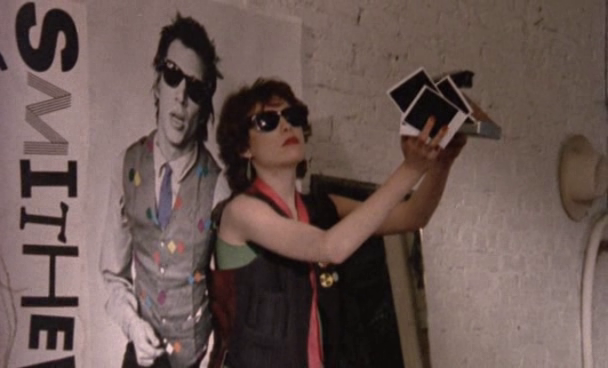 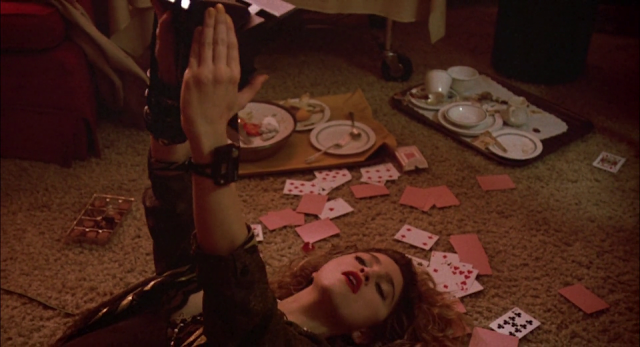 Susan Seidelman's first two films are an argument for her auteurism through fashion and her muses are these bohemian new wave 80s icons. Madonna has never been presented more lovingly, and in the first phases of her career it was no surprise that her look captivated a nation of millions of teen girls looking for an idol just as strongly as they did with a frustrated New Jersey Housewife (Roberta). Wren did not carry with her the cultural cache of Madonna's Susan, but her look is altogether just as impressive in a grunge-y gutter punk vibe that would echo the coming fashions of people like Pat Benatar. As time capsules of the fashion of the 80s these pictures are remarkable, but evenmoreso these are great women's pictures emphasizing something often seen as unimportant in the cinematic world, but Seidelman treats fashion as power, and the Women who create these outfits as figures of importance.