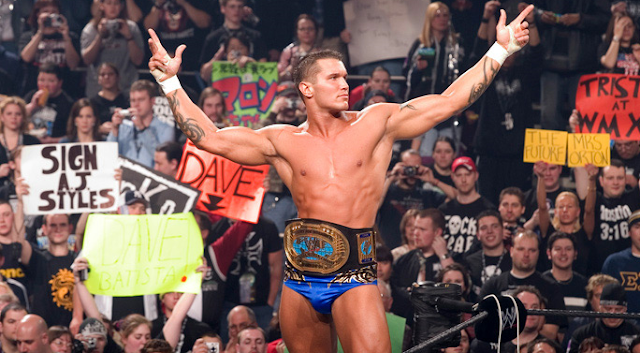 Best for Business will be a recurring series at Curtsies and Hand Grenades discussing one year of pay per views currently available on the WWE Network through general overiews, a ranked list of matches, shows, a most valuable player, worst wrestler and final thoughts.

I came upon the idea to feature a column called Best for Business when I attained access to the WWE Network, and considering my wrestling fandom was spinning out of control into full blown obsession I thought it'd be interesting to navigate an entire calender year of wrestling through the special events that were held. Now, I don't have the capabilities to research or go through every great match on Raw so those matches will be absent from any discussion, even if I so badly want to talk about the revolutionary status of the Monday Night Raw headlining match featuring Lita and Trish. I do however, want to get into why 2004 would be my first year. I long since got into wrestling and recounted that story in various places on tumblr, here and my creaky "I swear we'll get back to it" blog over at Push-Cesaro, but for something less serious and more fun I wanted to diagnose a year, and my boyfriend was the main factor for choosing 2004, because that was the year he became a fan. His favourite wrestlers were Chris Benoit and Eddie Guerrero. You can already see why he'd quit watching in 2007, because when discussing 2004 there is a giant elephant in the room. Chris Benoit is one of the greatest workers to have ever stepped into the ring, but I can't dismiss his personal life when bringing him up. I'm going to talk about his matches here and some of his biggest moments, but it should be noted that I do not in any way condone, dismiss or sweep aside his actions that are entirely reprehensible. His matches are hard to watch, because his in ring style seemed to contribute to his brain condition. Wrestling isn't a pretty medium, and tragedy seems to follow it around constantly, and even when matches are beautiful (and Chris Benoit has a lot of matches that are) it's often trailed by something far sinister, and in Benoit's case I hope never happens again.

2004 is characterized by two opposing ideologies that split up the year rather neatly. The idea of rewarding the hardcore wrestling fans who care about workrate, match consistency, underdog mentality and formal brilliance is the first of these narratives, and it culminated at Wrestlemania 20 with the crowning of Chris Benoit (and one month prior Eddie Guerrero for the SmackDown brand) as champion of the Raw brand. Benoit and Guerrero toiled away for years and years in different companies, most notably WCW and ECW, before making the trek to WWE and finally capturing the biggest titles, and in Benoit's case on the grandest of all possible stages. They did this by beating men who seemed more company approved in Triple H, Shawn Michaels and Brock Lesnar. In Benoit's case he would beat both Triple H and Shawn Michaels clean in consecutive months at the Wrestlemania and Backlash pay per views. You cannot put someone over more strongly than they did here, and for the most part Benoit's reign as champion was strong and only ran into issues when matches became overbooked (a common trend after mid-year's SummerSlam). His title defense against Triple H at Vengeance is especially great until Eugene's narrative of friendship or betrayal overshadows a near 5 star match that would have easily been a notch in the belt of both men and quite possibly the greatest pay per view match of 2004. Benoit would drop the belt to Randy Orton, but I'll get to that shortly. The other champion, Eddie Guerrero defeated Kurt Angle at Mania. Both men shared in celebration to close out the ceremony at Wrestlemania 20 in tears in what would be one of the most purely joyous Mania moments of all time if not for the Benoit Murder-Suicide Tragedy. On this pay per view is my personal favourite match of the year in that title defense against Kurt Angle. Both men are technical wizards in the ring and in 2004 both were in their prime. Guerrero's Lie-Cheat-Steal mantra proves to be true as he finds a way to get around Angle's signature Submission finisher and eventually takes the victory. Guerrero's matches do not suffer the consequences of overbooking like Benoit's occasionally did, but he did run straight into the oncoming storm of JBL's Texas Fetishist heel which disrupted an otherwise beautiful run with the belt that featured incredible matches with Lesnar (where he won the belt), Angle, and JBL twice. His rematch with Angle at SummerSlam also happened to be one of the best matches of the year. However, he'd drop the belt to JBL around the same time Benoit dropped his to Orton and the time of form over all else champions came to a close.

The other narrative of 2004's booking is one of rewarding more typically ideal wrestlers for the WWE mold. This included HHH, Randy Orton and JBL. Evolution was one of the biggest factions of all time, and their presence clouds over every ppv, just waiting for the proper time to overwhelm a match in favour of the heel faction. Wrestling fans at the time had to have known that Benoit would be a short term champion with the strong push from Randy Orton in his legend killer days. It was all but over when he took out Cactus Jack in a tremendous hardcore match following Mania. He'd be the champion at some point this year, and while his reign was short (the belt went to Triple H almost immediately) he was set for life as he became one of the stars WWE counted on for the next ten years. HHH, oh HHH, the bane of the hardcore fan's existence. Would it be strange of me to say that I'm a fan of his? Dropping all pretenses of context and future booking out of the way HHH is a solid ring general whose Hemingway with Muscles style of Wrestling is either perfect for the given situation or so hilariously overwrought that one can't help but find him ludicrous in the most overdramatic ways. That was never more apparent than in his near year long feud with Shawn Michaels where both men would bleed at a stiff breeze, and lie exhausted, nearly beaten to death and telling stories with their bodies that were EPIC in all capital letters 100 percent of the time even if they never quite reached the heights they were so obviously going for. The two didn't always deliver classics, but it's hard for me to ever fault Shawn Michaels who has a way of pulling a decent match out of even the most average of wrestlers and Haitch is far above average. JBL is the only curiosity here, as he isn't as typical as the men of Evolution. He has the size one would expect from a stereotypical WWE title holder, but I guess sometimes that's all you need. It'd be dismissive of me to say that's all he had though as his heel character was actively cowardly, detestable, and toxic to the entire SmackDown roster in a way that made me actively hate him. It's just too bad he didn't have much more than a Lariat as far as in ring talent goes, and his limited ability inside the ring really showed when he was asked to carry matches with Taker (who was still too reliant upon striking and spooky booking at this point) and Booker T (spinning kicks for days that never make any sort of impact). For my personal tastes I prefer the earlier title runs of the year, and find something of great merit in Eddie Guerrero especially whose in ring ability has always been second to none. He even made a cowbell on a rope match bearable and if that's not enough to be considered the MVP of the year then I'm not sure what is.....

So that takes me to the MVP of 2004. Based purely on statistical analysis of all main eventers Eddie Guerrero comes out on top with a baseline 3.8/5 for his matches on the year. Chris Benoit and Randy Orton come in at 2nd and 3rd with Shawn Michaels and Triple H following closely behind. In my gut and in my heart Eddie is also my MVP. His strengths as a character come through, and his ability to use loveable heel tactics combined with lightning precision created something wholly unique and in his matches with Angle specifically he was given the chance to showcase the very best of his abilities as a wrestler and as a narrative force with slight alterations on his cheating mantra while still creating matches that were textbook choreography built around either technical or physical wrestling depending on the opponent.

The Worst wrestler of the year is an easy one and it will feel like I'm going after a predictable target, but it's John Cena. The most remarkable thing in exploring Cena in 2004 to Cena in 2015 is seeing just how much he's improved over the years, because as he stands now he is one of the most reliable in ring hands the company has. This isn't the case in 2004 where his gimmick was in overdrive, and the doctor of thuganomics sloppily bungled his way through matches. His presence and the seeds of the wrestler who'd become one of the most popular in the history of the medium are here, but one would be hard pressed to present a significant example of wrestling ability at this point in his career. It doesn't help that he was saddled with Booker T and Big Show throughout 2004 and in the dungeon of SmackDown, the very obvious B-show, where everyone but Guerrero suffered. This didn't stop Cena from getting over though, and the difference between the crowd's reaction to his fun mid-card, hokey gimmick into main event level pops by the end of the year is interesting to chart, because by the time Survivor Series rolled around in November he was a member of Team Guerrero, but easily the most over member of that squad so I cannot fault them for booking him the way they would following his earliest years. Luckily he proved to be an ace hand with years of improvement later on.

My final thoughts are those of both exhausting and appreciation. I wouldn't have watched wrestling in 2004 in WWE consistently for one specific reason I haven't brought up yet. The rampant sexism of both Raw and SmackDown is extremely offputting. It would take me far too long to list all the examples of shitty actions towards women, but a few that easily stand out are playboy evening gown matches, Lita's lack of choice in the Kane/Matt Hardy feud that leans towards rape narratives, and Tyson Tomko versus Steve Richards at Unforgiven echoes queerphobia and transphobia as one wrestler beats another in drag for what feels like half an hour as the crowd laughs. These things don't make the otherwise solid wrestling year passable. I wouldn't necessarily wish I had my time back, because almost every show delivered a match that was commendable, but WWE in 2004 was not for me, and I guess wrestling still isn't because these problems still persist, but I love the fake punch sport and I'm willing to step on these land mines if it means I get things like Kurt Angle versus Eddie Guerrero, even if I question if it's worth it almost constantly.

Overall Grade for the Year: B-