My Favourite Examples of Filmed Media of the Half Year: 2015

Sleater-Kinney: Live at the 9:30 Club

The news of Sleater-Kinney's resurrection surfaced sometime in early October. There were rumblings of an unmarked single containing a new song being featured in their box set "Start Together" that set my corner of the internet abuzz. When those reports were signaled as true it was a cherry on top of what was the best birthday I had experienced in my entire life. I was looking at a cake that for the first time had my real name, I had a ribbon pinned to my chest that said "Birthday Girl", and there was a 5 second clip of a new Sleater-Kinney song on youtube. I couldn't have been happier at the prospects of new music from a band that felt less like a trio of musicians and more a reflection of something that apparated out of my soul. I knew that I'd never get the chance to see them live so I held onto any and all clips that surfaced on youtube, but then NPR announced they'd be streaming an entire show. This was going to be the closest I come to seeing this band that I love so dearly. I turned the lights off, put my headphones on and turned the volume up to unhealthy levels and wept at the first notes of "Price Tag". I wasn't there, but it felt like I was and when Corin Tucker lifted her hand out into the audience during "Gimme Love" and sang with the ferocity that made me fall in love with her I reached out too. 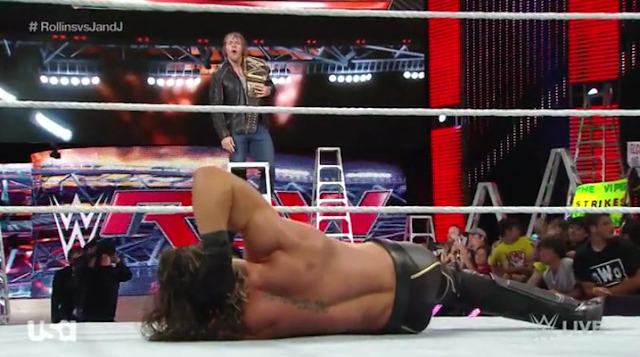 1...2...3...and I jumped what felt like 10 feet. I squeeled and repeated over and over again he did it! he did it! I was lost in the moment of my guy conquering the man who betrayed him and as a consolation prize he was becoming world champion. Only the moment was taken away seconds later to my eventual cries of "what just happened? why did they do this?". Emotional Whiplash. Dean Ambrose pinned Seth Rollins in the middle of the ring clean, but before all this happened Seth pulled a referee in front of Ambrose as he hit a diving elbow. That referee was unconscious afterward so another ref came out to count the pinfall. When the unconscious ref awoke he threw the match out and ruled it a disqualification. Dean Ambrose had won, but it didn't count. My emotions did though, and the teasing of that moment was downright cruel, but Ambrose decided to take the belt anyway, and I can't blame him, because he did earn it in that specific moment. I rode the highs of Ambrose holding that belt for the next 2 weeks even though in the back of my mind I knew this was false. Dean Ambrose has been yanked and pulled around by WWE decision makers for the better part of 8 months now, and despite his organic ascent to becoming one of the most popular wrestlers in the company they refuse to give him much in the way of anything to celebrate. Even as I type this he has suddenly slid back into the middle of the card after a few weeks of flirting with the main event scene. It's brutal being a Dean Ambrose fan, and even this moment which made me fall back in love with WWE isn't exactly real. Dean Ambrose never became champion, but it felt like he did for about sixty seconds, and in that sixty seconds I felt a joy that can only be administered from professional wrestling. I've never leapt into the air at the close of a film. I did when I thought Dean Ambrose won.

For all we've talked about the feminism or the bombastic over-saturated colour scheme we haven't discussed Fury Road's minimalism. This is a straight line. As soon as Furiosa heads east there are no divergences from that path. When she turns and goes outside of the course she has been set everything becomes a chase predestined towards forward momentum. We're heading home, to the green place, away from oppression. The movie never wavers from this thesis of lunging forward as Furiosa and her gang of women (plus Max and one Warboy) push through the dust and the dirt and the rocks towards an area of peace, but as soon as they get there they realize there is no serenity to be found in running away. So they double back on that straight line they traveled at the beginning of the movie and attempt to make peace with where they're from and create a heaven of their own, but they're still moving forward. They're just heading back. All the while Miller is riffing on the same action sequence that he introduced at the close of the first Mad Max, and through years of restructuring and building upon that forward momentum of a straight road stampede of engines he perfected his craft. It's even more astounding he did this in Hollywood where branding has been centralized over auteurism in years of late. 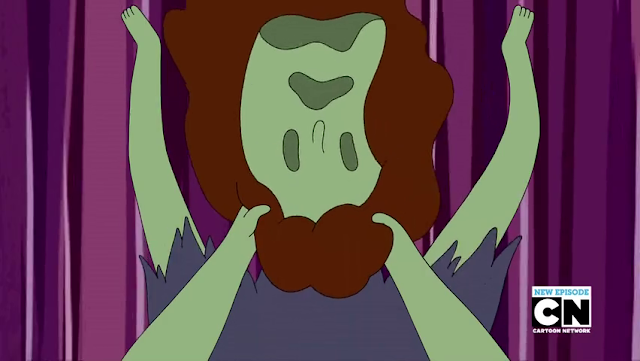 Madness and Magic: The Abstract in Adventure Time

When Adventure Time announces an episode featuring The Magic Man it always graces the creators of the show reason to become abstract and imaginative in a way that other episodes do not offer. Magic Man is a creature of pure chaos whose only limitations are his desires at the moment. With his magical power he can transfix any given scenario into something horrific, and here we finally see his backstory as well as the next chapter in Ice King's unraveling as Adventure Time's most sympathetic character. Magic cannot exist without madness in the land of Ooo and when you give yourself over to that power you lose control of yourself. Magic Man's hat, like Ice King's crown, is the origin of his destruction. He is not an evil man, but one being controlled by external forces. When his hat is removed later in the episode by Betty who had been working as Magic Man's assistant  she also becomes infected with magic, and she is now in the same boat as her former lover Simon (Ice King). If this all sounds convoluted it's because it is impossible to explain the complexities of Adventure Time's backstory as it goes far beyond the depth of most shows by consistently building upon narrative threads and characters, sometimes even seasons apart. What truly makes "You Forgot Your Floaties" a classic episode of the shows willingness to engage with the absurd. In a dream sequence Betty finds herself in a monochrome world of black and white (resembling a soulless Yellow Brick Road) before slowly being sucked into the mouth of a statue resembling Magic Man after she dons a mask of his deceased wife who is later revealed to be at the center of his need to meddle with magic. Monsters appear later, and they sift in and out of phases of dreamspace, meeting up with gods and rulers alike, until finally coming upon Ice King's muted voice speaking in severe close-up (in an homage to Robert Altman's 3 Women of all things) about the presence and core of magic. Betty takes that risk of madness to try to save Ice King when she steals magic man's hat. She already suffers under the effects as her eyes glaze over and her sense of self drowns in power. This is all setting up a later confrontation between Betty and Simon where they will likely confront their past and their future, and a storyline that Adventure Time has been playing with since the beginning of the show may finally come to a close. , 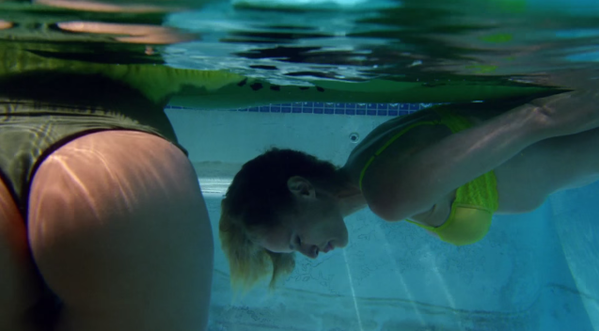 Bitch Better Have My Money: Taking Back the Anti-Hero

Mikki Kendall (follow her on twitter, @Karnythia) tweeted shortly after the video for "Bitch Better Have My Money" dropped that Black Women hardly ever occupy the space of anti-hero outside of the music video space, and she's absolutely right. Only Pam Grier comes to mind when I think of the Black Woman Anti-Hero, but many more come to mind when asking the question of white women, and one would need to go no further than looking at last year's Amy Dunne from David Fincher's Gone Girl. It's appropriate to bring up Gone Girl, because the image of a woman caked in triumphant blood bookends both this video and the height of Amy Dunne's revenge. The image of a woman taking back what was hers by becoming violent can be a powerful image, and I think Rihanna's extreme close-up is one of the best single images in all of cinema this year. Rihanna shows a clear understanding of the types of influences that are sprinkled throughout Bitch Better Have My Money like Nicholas Winding Ref's penchant for neon coloured violence as seen in Only God Forgives, the seaside excess of something like Wolf of Wall Street or the Tarantino-esque still captures of characters like Mads Mikkelson's "The Bitch" as seen here. Rihanna refashions all these cinematic tools into a point blank statement that is only strengthened by her song's directness. It's totally cinema of her power, and what happens when you get in her way. It's anti-heroic, and it's also exhilarating. God only knows what else Rihanna might have in mind when it comes to movies, but if this is any indication she has the talent to take the world by storm.